My phone battery is heading south, and she ain't bouncing back up. I've been searching all over Lawrenceburg, TN for a phone repair shop this afternoon and we don't have one.

Heading to Seattle with a dead phone is not an attractive option. Ok, just found a place down in Florence, AL called Fix N' Go. He has one Samsung Galaxy S20+ battery in stock, and he can do the job for $90.

The guy was really knowledgeable, had me go to settings and get the exact model type, and he had it in stock, as opposed to his other two competitors in town, who I tried first.

Cool, I've been trying to figure out what I was going to do tomorrow. I told him I would be there at 0900 sharp.

But, what if it's not the battery? The other day I had a moisture alert for the charging port. What if I damaged it by not letting it dry out completely, before using it?

Man, maintaining your stuff is getting really complicated in 2022. In my early life, things were simple. As I approached middle age I was absolutely convinced that I would never make it to the year 2000, much less hold an amazing computer in my hand twenty two years in.

Around 1980, I coordinated the purchase and delivery of an IBM storage system (hard drive) for Interocean Steamship Corp in SF. We hooked it up to their Sys3, Model 38, which was a large computer. It would take up to 1/3 the space of my living room.

The big drive arrived and everyone was excited. It was on rollers, stood four foot square, and sided right up to that IBM mini-computer.

Ya wanta know how much space was on that drive?

One megabyte. One measly million bytes. But for this growing company, it was like data from heaven.

One byte consists of eight bits of binary data (0 = Off, 1 = On), representing a value from 0 to 255. Mapped against a character set, one byte represents one unit, whch could be a letter, a number, or a special code.

For example: 01101111 is the binary version of lowercase o. Think of a byte as one character.

Today, we deal in terabytes, which is one million of those $65,000 one megabyte IBM drives.

If our society survives another ten years, can you imagine what lies ahead? 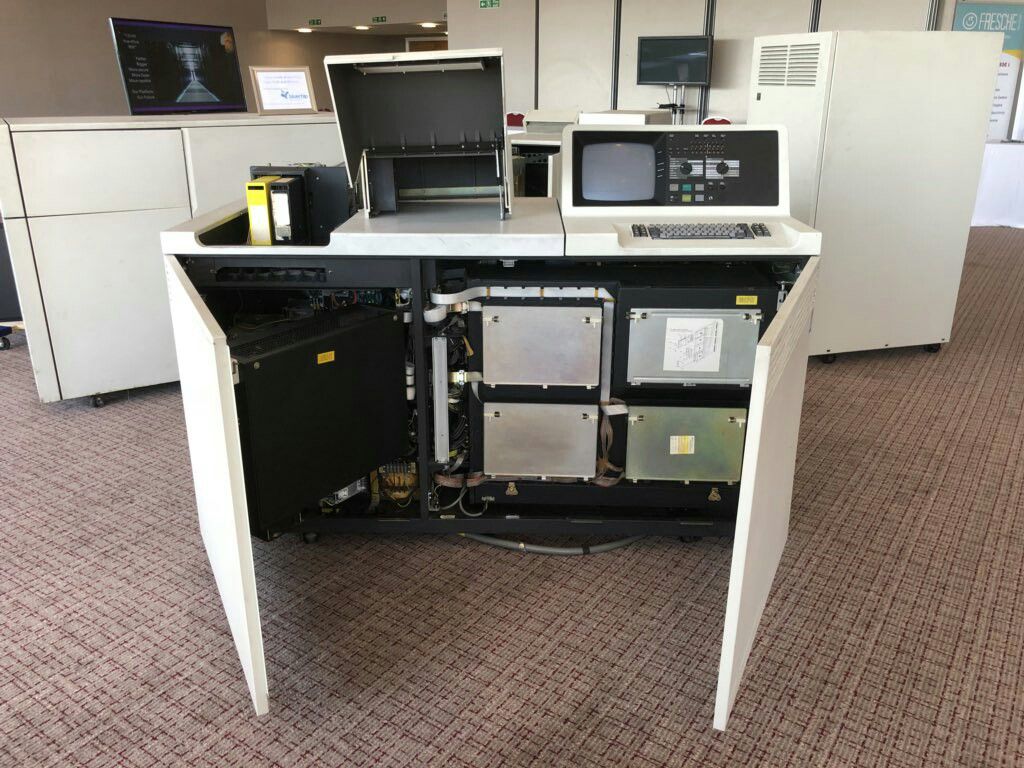 My new electronics travel bag arrives Saturday. I have this cool cable and dodads organizer to put in it, along with my laptop and tablet. I can carry it over my shoulder and present it as a package to TSA as I fly to Seattle to meet my newest grandchild.

On Sunday, I'll load it up, along with packing up my rolling bag. Ha! I'm putting my bulky Garmin GPS and a crazy light ball into the bag, I guess I'll have to notify them...

At 1600 I'm going to drive up into the park and hang out with my fellow CSTC crew for an end of the season gathering.

Then, drive to one of those layover gas stations near the Nashville Airport, and spend the night on the memory foam bed, inside my canopy.

In the morning, grab some coffee and an egg biscuit. Then I have an easy shot over to the Fly Away parking spot for an 0800 check in, that I have reserved and paid for.

My boss just sent me a text. She's been catching up with my blog and made this fine comment. This is why I do it.

I bought this cool little flying ball off Amazon, and it showed up today in a small box, transported by a large UPS truck.

I charged it up, turned it on, and the lights began to flash. Nothing happened, the rotators inside weren't turning.

So, I read the directions and learned you had to give it a shake to wake it up, oh cool.

It's supposed to hover in your hand, or return to your hand if you throw it up at an angle. I thought it would be a great ice-breaker to my new grand-daughter.

So, I'm in my chair, shake it, and throw it up at an angle. That SOB started flying around all over my house, lights flashing, bouncing off walls, buzzing my head, until it finally dropped to the floor and stopped.

Whoa, it was crazy. So I picked it up and took it outside. Once again, powered it on, shook, and threw it at a 45° angle.

It flew straight up about 15 feet, and headed West, over my carport, over Daniels house, and it probably landed in the downtown square. OMFG...

Click the image to check it out on Amazon. 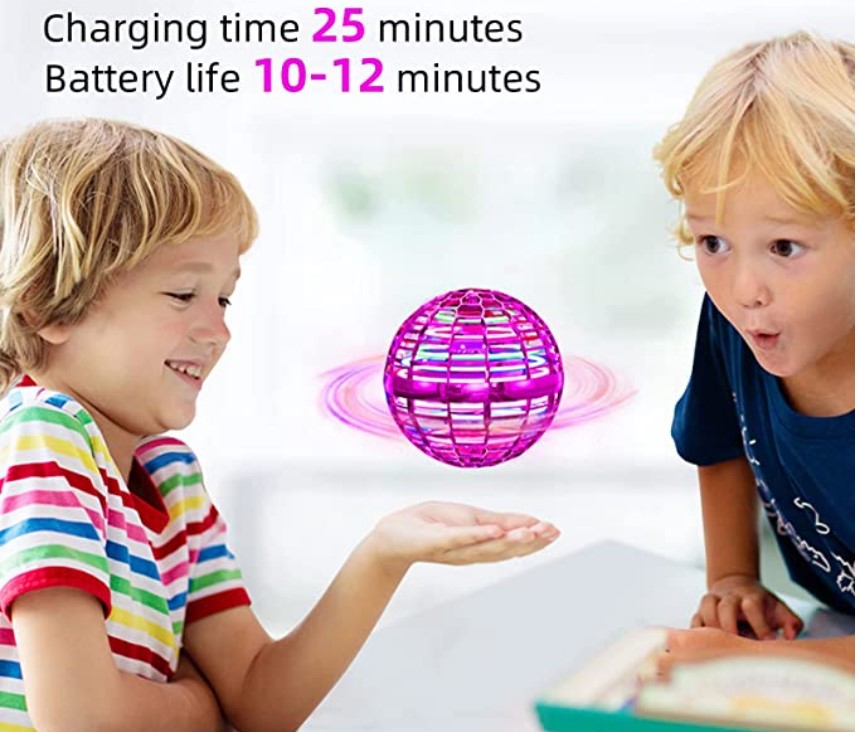 Update: I found it down the road, hiding behind a bunch of leaves...

I eat a lot of eggs, and I love getting hold of the good ones. Kroger offers Pasture Raised eggs for six or seven bucks, but you really don't know what your getting. Sometimes you need to go to the source.

I've been following a lovely lady with the handle farmerkaty from Lawrenceburg, TN, on TikTok. She talks about her farm and her animals, but particularly about her chickens.

I decided to drive out to her place this morning so we hooked up via email and text and I was off on an adventure for some farm raised, free range eggs.

It was a twenty mile drive out into the country, on beautiful little roads I'd never seen before. Katy was charming, I met her family, then met her chickens. She even pulled three eggs out from under a laying hen, placed them in my hands, and they were warm.

They just recently started adding minerals from volcanic ash out of Utah, to the feed, so the eggs should be healthy and delicious.

I got four dozen eggs, two unwashed, for $4 each. The unwashed have a layer on them called the bloom and they can go un-refrigerated for three weeks. Both types can last for three months if refrigerated.

I can't wait to taste them. Here's the unwashed eggs: 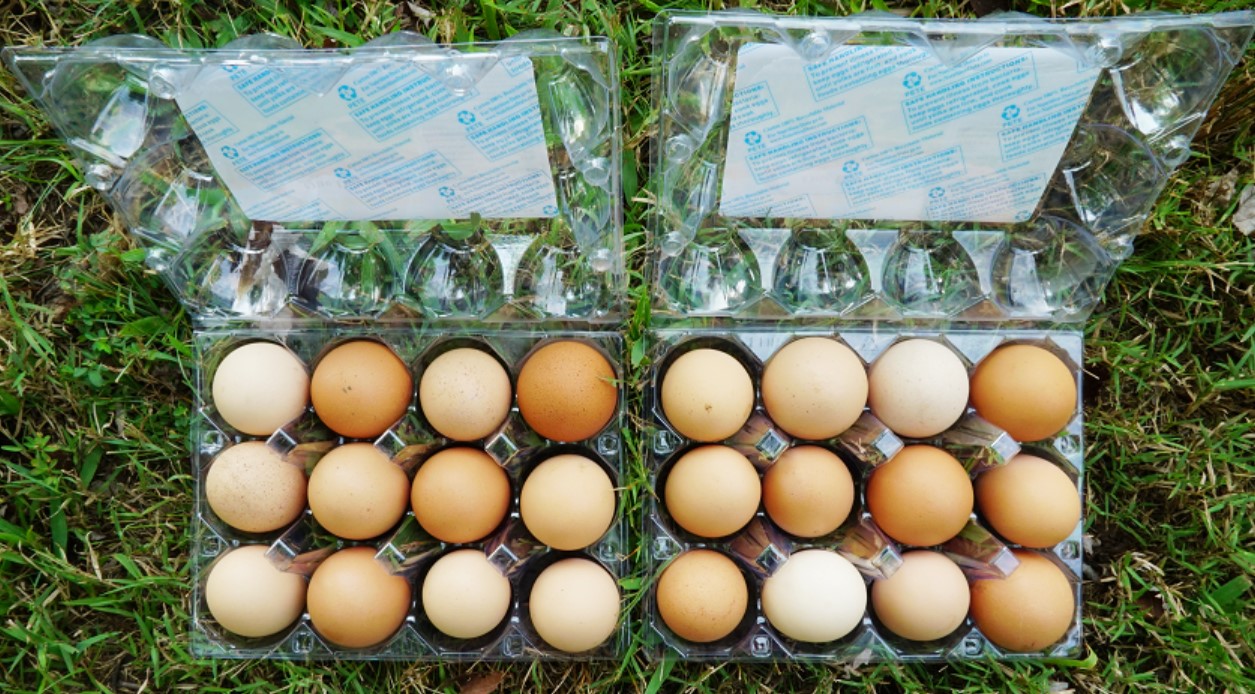 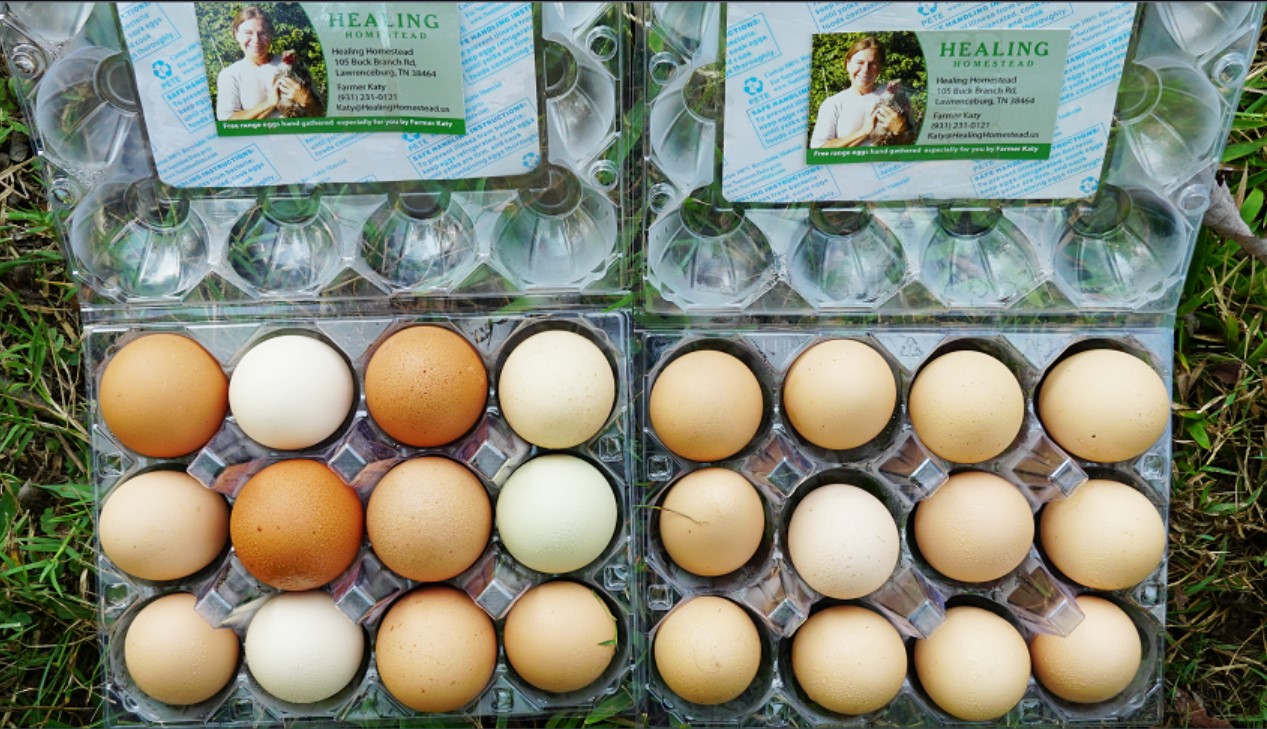 And I met my first TikTok influencer today, very cool. Here's her Facebook.

And this is Farmer Katy Eagle. She lives on that beautiful farm with her husband, and her mother and father. Real, down home folks.

Happy Labor Day, to all of the hard working people doing actual labor. I guess that included me this summer.

I worked hard out in the sweltering heat, the noise from the office conditioner along with the compressor was loud, it may take months to get the glue out from under my nails, and today it was over.

I never missed a shift, always there early, I even showed up a few days that we called off. Granted, I only worked three to four hours a day, until the immediate patching was done.

I could have pulled a full day shift if I wanted to, there were some tubes there that needed hours of surgery to bring them back to life. I consider that just running out the clock, cheaper for the company to just replace it.

So here's the status of my office on this last day. First off, it's cleaned up and organized. Towards the back there are three stacks of tubes:

• On the left, the surgical repairs, tubes damaged badly or proven to not be quickly patched.

• In the middle, the tubes whose new patches are curing for 24 hours. There are currently three. This new technique has worked great, btw.

• On the right, behind the box of new green tubes, are the tubes that were killed in action and have become patch material, to cut out and make your own, depending on the color of the tube. I believe all colors are represented.

On the left shelf are the tools and cleaning supplies. I have contributed many of the items there, to the company, just to make my job easier. Ricky, consider this a gift to the next person who does this job! If they need training next season, hit me up.

Brian, here's our hangout space in Rileys back yard. No expensive hotels, and he's providing a car. We are free to enjoy my family and friends, maybe make an epic drive down the Oregon Coast, then make it back for Ariella's birthday.

Or if you want to stay local, I'll show you Seattle :-)

We really havn't planned this other than to meet at Seatac around 1800 for Riley to pick us up.

Can't wait to see you, my nephew, my friend! 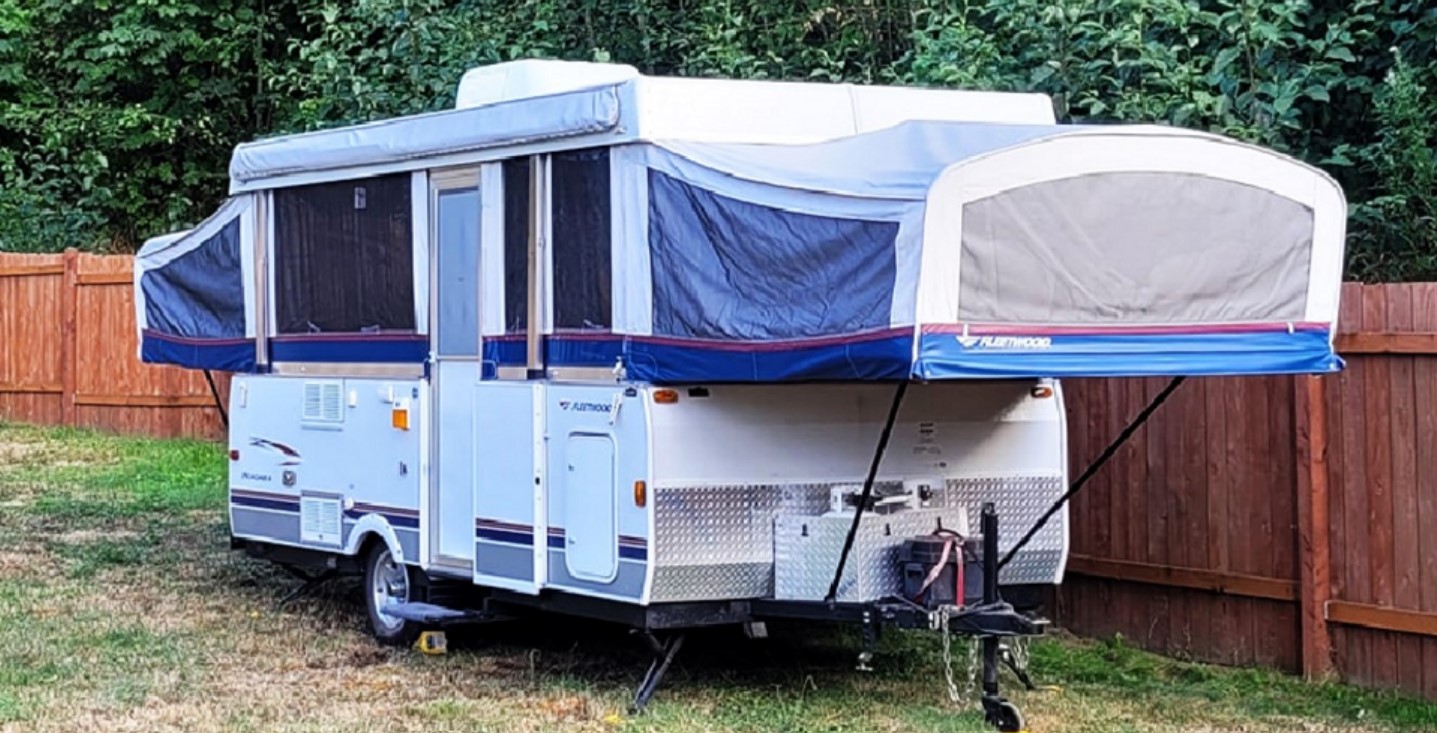 Here we were four years ago at Lava Hot Springs: Water Buddy

I create, therefore I thrive. I need it, to stay alive.

My coding days are gone, but the creativity is still bursting out of me, in the form of writing. I love to write!

A blog post is the process of starting a thought, expanding on it, and then completing it to satisfaction. Kinda like sex.

When I first got to Lawrenceburg and had my internet set up, I knew it was time to start a new blog. My old one, BusDriverJim, used the WordPress CMS (Content Management System), and it was great, but I wanted to try something new.

So I chose Joomla, and I love it, a perfect choice. During construction, I had to make a critical decision, wether or not to allow comments. I chose not to.

My initial blog did, and it turned into a social media event. It was fun, but I realized I wanted my own platform to speak my truth clearly, with no feedback to blur it.

Drop into the Stuff menu item and see what I've built with this CMS.

I turned twenty one during the Summer of Love, 1967, and I was hanging out on the corner of Haight and Ashbury, eating fish and chips from a newspaper and trying out every drug they had going on.

I crashed and burned from that scene, and I was a mess. My grandmother intervened and got me over to Reno, NV, to stay a while with my uncle Morris, her nephew the Catholic priest.

He was cool, young people would come to his door and he would lay his hand on their head and say "God Bless You Children", facetiously.

He was also straight, which was unusual at the time. Towards the end of my one week visit, I talked him into wearing some street clothes and go into downtown Reno with me, and we went to a strip club.

My poor uncle was one flustered dude, hell, I don't know how it works becoming a priest, maybe he had never been with a woman. Religion is so weird, especilly the Catholic one.