If I could find my bad habits On/Off switch, I would flip it to Off. But I truly don't know where it is anymore.

I loved that switch, flipped it Off a few times here in the South, got healthy and fit! Then you lose it for a while, the switch turns back On, and the cycle of life continues.

I have arrived at a point of acceptance about myself, and how I interact with everything else, and I'm really glad to be alive!

I love life, I love people, I love sharing my story, and I don't hate or feel badly about anyone! Thank you for reading.

I have only a few friends in this area, two of which were formed from working at Crockett Shoals Tubing. Three summers ago, Crissinda was the manager and Elizabeth was her assistant. Crissinda and I have formed a nice friendship since then, which her husband and kids allow me to share.

Elizabeth was the manager this summer, and I was reminded of her kindness and sharp wit, that I enjoyed a couple summer's back. She's also Madeline's favorite aunt, so that ranks high in my book.

Getting together with these ladies, evolves around food. I had that great catfish dinner with Elizabeth, her sister, and Maddie, and a soul food lunch with Crissinda, a while back.

This Thanksgiving, for the first time in a long time, I'm getting out of the house and spending it with Elizabeth and her people. I asked if I could bring anything, she replied "to go containers". And she has agreed to meet me for brunch in the Park next Sunday, finally, some company for that event!

Thank you ladies for being my friend! And yea, this 76 year old ex-hippy is hard to deal with sometimes, but you both have recognized that I am smart, and have a good heart.

btw: Daniel just told me that homminy is rotten corn, combined with lymestone and hardwood tree ashes. The slaves here in the South, along with the white poor, were forced to pick up that corn, and make a meal of it.

He also said a mess is a measureing unit of things in the South, like polk salad, the amount necessary to feed a family of four or five.

Products we buy in the store are shrinking by volume, count and weight, while costing way more from a couple of years ago. Don't know why I felt obliged to write that, as if you didn't know.

My great $400 rent has also had two $50 raises in that time. Gas? NetFlix? Prime 2 day shipping turning into 7 or more? nuff said!

Yet some things don't cost nuttin, like this cool Titans blanket that a Secret Santa left for me last night. At least that's what I thought until Daniel told me he brought it over, after seeing me sitting in my chair with the super heavy goose down jacket on, that I brought from the mountains of Idaho.

The blanket is now slung over my chair and feels nice. Meanwhile I'm still in full insulation mode, with the gas heater off, just trying to keep my bill down. 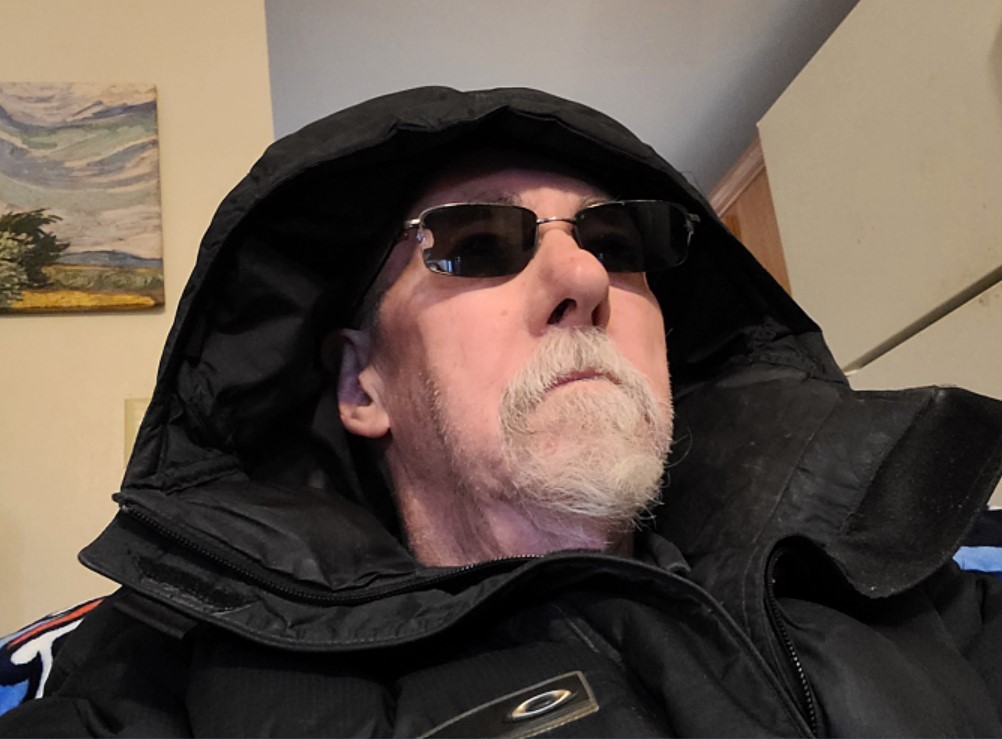 Don't know if this a gift or not, find out later. Probably. Daniel knows he gets the chairs, and everything on them, when I die from hypothermia, real soon now...

Another day feeding my buddies, then feeding myself to the Sunday buffet at Crockett's Mill in David Crockett State Park. Bacon and sausage, three eggs over easy, home style potatoes, grits, biscuits and two types of gravy, plus hot peeled apples.

The food was great and the apples were warm and spicy, must be a Southern thing. My servers name was Katy, really down home, pretty and nice. I mentioned Farmer Katy and she said she had twenty acres herself, and after making fun of her kids for using TikTok, she can't go to the site anymore!

I was stuffed from that one plate, and didn't go for seconds. I could have ordered another stack of everything, if I wanted to. This is a different type of buffet, you don't walk the line, it's brought to you. $16.41 out the door, plus a nice tip for Katy.

Here's a short clip of the morning:

As I drove towards my house this morning, coming back from the Park, I spotted a large duffel bag on the side of the road. There was nobody coming either direction, so I stopped to look inside.

What if it was Cartel drug money? Big bound stacks of $10K each inside. Hey, I'm an informed guy, I watch NetFlix and Prime, there's probably going to be a tracker on it, and they're on their way now.

Then, as I approached the bag, the ethical issues start blasting through my mind. Should I call the cops? Hell no, I respect them, but... Take the duffel bag to my place? Ahh, no and no! Drive it to a secluded spot and move the cash into my truck and then toss the bag with it's tracker into the creek? Ok, maybe! But wait, that's littering.

I unzipped the bag and was greeted with someones clothes and belongings. Kinda had homeless written all over it. I zipped it back up, drove off, and a while later it was gone.

I've helped several people out since I've lived here in the South. On three occasions it involved me bringing a homeless person back to my home, letting them shower and put on clean clothes, if they had any. Then feed them and offer either my floor with a memory foam bed, or my truck with the bed, to crash on. Gena stayed a couple of days, and was a success story, I still hope. Glad I still have a photo of her...

Breathe. Let go. And remind yourself that this very moment is the only one you know you have for sure. – Oprah

I have an idea for a new device. It's a small unit, about the size of a silver dollar, that installs magnetically to anything with a metallic interior, and is used to cook food.

It's heat resistant to levels above the standard. It's got a 3D camera that constantly scans the food, using AI to identify each item, and determine the internal temperature.

This data is then streamed through the walls of the oven to the tablet, or phone, sitting up on your counter. An app is running that shows the 3D contents of the oven, with pop-up floating buttons that show the exact internal temperature, and minutes until done.

Simple, the unit lives inside the oven and is turned on and off from the app. I call it the Hamilton at the Beach Food Analyzer.

Yesterday on the drive North, I went through the drive thru at a Burger King along I-24, and bought a Big Fish sandwich. I pulled ahead to a parking spot, ate it, then walked into the place to use the bathroom to clean up, then on down the road.

Within a minute of leaving, I got a text, supposedly from Burger King, wanting me to click a link with a bunch of funky characters in it, for some rewards. Here you go:

I really don't think Burger King hacked my phone for it's number, but it happened, so somebody did. Somebody near the Burger King, who could associate my particular visit there, with the cell phone sitting in the passenger seat of my truck!

And then text me a link, which I knew was bullshit. Unfortunately, a lot of folks would just see "Burger King Reward" right after leaving the place, and then click the fucking link. Suddenly they are screwed!

The more I think about it, our cell phones must be broadcasting our number, and the hackers have learned how to capture that number, and associate it with a geolocation! This is serious folks!

I had a pretty good buzz going on as I left my motel room in the afternoon for the bar & grill, trying to figure out a way to cross a busy four lane highway, with no pedestrian crossings.

As I walked along the sidewalk, a white car came out of a shopping area to my left and I saw a nice looking lady in her fifties. I pointed at her and she stopped, to my surprise, and rolled down her passenger side window.

I walked over to her and asked if she would drive me across the highway to the bar. She said "I can't do that, you're a stranger!" and I quickly told her that I lived in Lawrenceburg, TN, I was staying at the Motel 6, and that I was a good guy.

To which she replied, "Ok, get in". As we're heading to the highway she turned to me, smiled, and said "I can't believe I'm doing this", and I told her that I was very grateful. She then asked me if I was a Trump supporter and I said "yes ma'am".

We arrived at the bar, fist bumped, and said goodby. In hindsight, I should have offered to buy her a drink.

The bar was fun and as I was leaving, and dreading the trip back in the dark over that highway, a big burly guy offered to walk me across the road. The last thing I remember was my hand on his shoulder, walking in the middle of the highway, and he says "Come on Jim, walk faster!

I woke up in my room the next morning, and all my stuff was intact. Another adventure on the books. I came up to Illinois thru Nashville yesterday and the freeways sucked, so on the return I headed South to Paris, TN and then down thru a bunch of great little Tennessee towns, to home. Then I loaded up a big bag of quack cocaine and went to the Park. The ducks were ravenous.

...and a correction to yesterday's post, they were not nose to nose when they met. 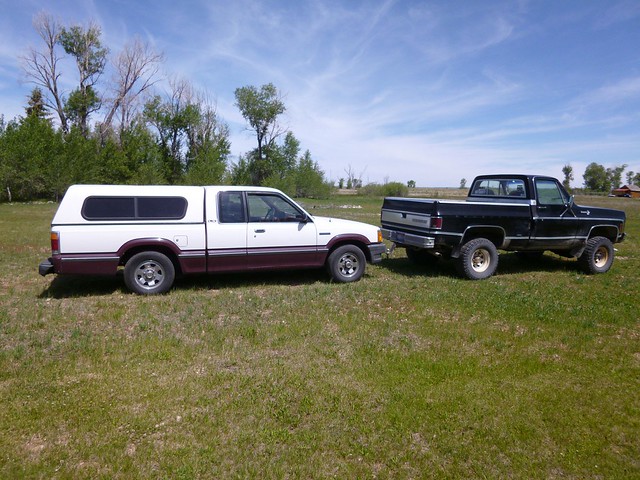 I really love my 1988 Mazda B2200, with a canopy and a bed in the back. Her name is Jill and she is one of the best things I have ever bought, thank you son.

She transported me to great adventures from the home in Idaho, across all of the States in the West. I would take the summers off from my bus driving job, and just drive.

Now she's been treating me to the East. I keep her in top condition and she rewards me with reliability. Currently has around 256,000 miles on her, stripped the emission controls off, replaced with a Weber carb and a header.

She's also been in a garage or under a canopy since I've had her, so her exterior is holding up well.

Why have I assigned her the gender specific name of Jill? When I drove it into Idaho it had no name and no gender, until I parked it out in our back forty, nose to nose with my big black seventies era lifted Chevy Silverado, named Jack.

This post was created at a Motel 6 in Metropolis, IL, using my phones wifi. Peace... 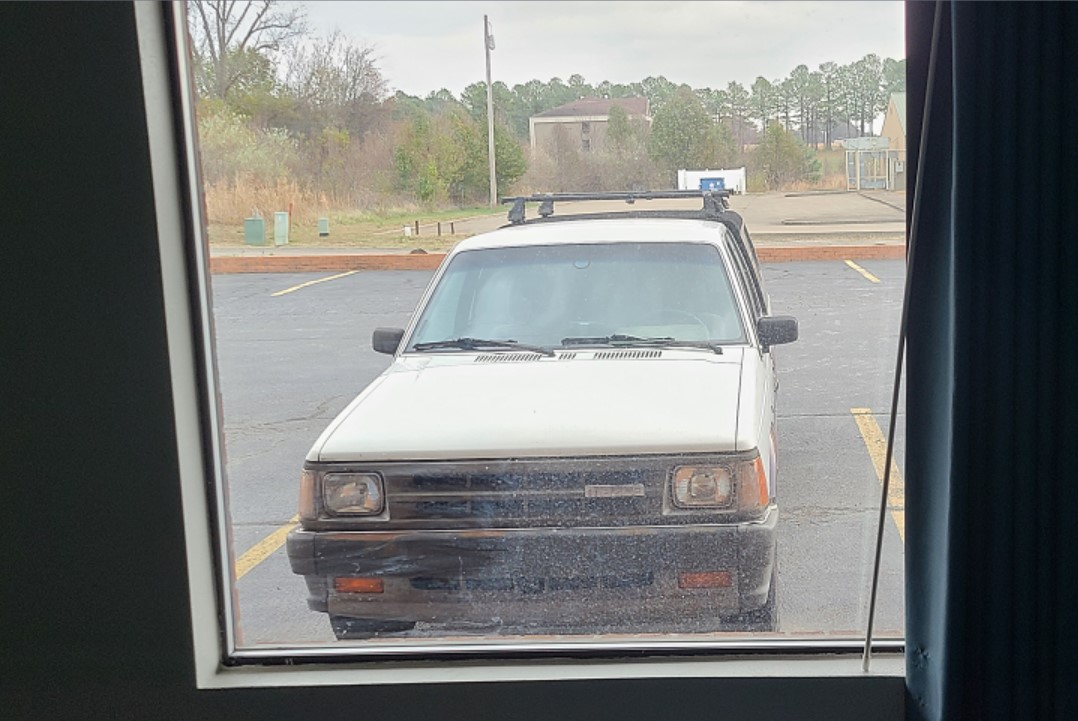 I need to get out of my head and out of the house, so I'm heading to Metropolis, Illinois tomorrow. It's 210 miles away, a four hour drive. The home of Superman!

I'll be staying at the Motel 6 with a quick stop at the Thrive dispensary for some legal weed. And it's right across the street from the Super City Bar & Grill, so I can get housed, stoned, fed and buzzed, without moving my truck until the morning. It's also right next to a Huddle House for breakfast.

It's the ideal one day vacation spot! I can also feed my ducks before I head North.