I think the Powerball Lottery is rigged. They know the numbers of every ticket sold, stored on their big computers. That's why they can announce that a winning ticket was sold at a particular store in a particular state.

So, armed with all that info, they "draw" numbers that don't match up fully with any of them. This allows the jackpot to rise into the billions, which brings out folks that would normally not play, and they rake in huge profits.

They will allow a few million dollar winners to keep people excited, but that's chump change.

When I checked the numbers in the morning for the most recent drawing, the site said there was a delay in the process. Apparently one State had an issue with reporting, so they had to pause everything to get back on track.

I researched it and discovered that State was California. The winning ticket showed up a few hours later in, wait for it, California.

Where does OldManjim stand as the election unfolds tomorrow?

My ancestry in this country goes back to at least the 1500's, maybe more. Perhaps my relatives were slave owners, I don't know. I have apologized to the black girlfriends in my life, and we were good. My black male friends have always been the best.

I have had my children aborted, and as I look back on everything, I am so sorry, it never should have occurred, and I miss you.

For many years I had no political affiliation. Just brain dead, moving through life, like a lot of people now. Tomorrow is the day to get you're head out of your ass, and vote!

I think illegal immigrant women and children flowing into our country from an unsecured southern border is great! The human trafficking business needs victims, and this fills the void. It helps to protect our female joggers on the street from abduction.

I hate paying over three bucks a gallon for gas, damn, I remember when it was $.19 a gallon back in the sixties, and around two bucks under Trump.

I have seen the prices for everything double, in the last two years, thank you Brandon.

So how am I voting? Flat out Red baby! I will go to my location tomorrow and vote R across every item on the ballot.

And I think Trump should step down, and give the nomination to Desantas. I love the guy, but he's too toxic, and we just need to win.

There you go, my opinion...

I was driving through the park today and spotted an old van, with a surfboard strapped to the roof, and the drivers door slung open. Of course I had to stop.

I approached the open door and there was an old guy sitting there. I said Hi, but he didn't hear me at first, realized he was hard of hearing, so I upped my volume.

I pointed to his roof and said surfboard? He said Yea, do you surf? I told him I have, and I sucked, and we started talking. He told me he was living in his van and just traveling around. He got out, with a cane, and we walked to the other side of the van and he showed me his living space.

I pointed to my truck and told him I have a bed in the back, and I love to travel. We made a connection, and had a great chat.

We talked about California, I told him I knew that great Santa Cruz surfboard maker from the seventies, been to his house, but neither one of us could remember his name.

I told him I've been to Belize a few times, but he blew my adventures out of the water. Back in the sixties he returned from Vietnam and traveled to Belize with a crazy ex-vet buddy. Took them a year and a half to get there, through Mexico, living in caves.

He currently works for Bryce Canyon Tours out of Utah in the Summer to build up his travel money, then visits friends and family during his travels.

I gave him my blog name but he said he's not into modern technology, and showed me his old little hand held something that he uses to stay in touch.

I thought about letting him park in front of my house for the night, to get to know him better, but he said he was on his way to Memphis, so we shook hands, and said goodbye. This was a cosmic connection.

Update: I just tracked down that seventies Santa Cruz surfboard maker. His name was Jack O’Neill and he had a great brand (still going strong) with a house out on the ocean. I don't remember how I knew his two beautiful daughters when I lived in Santa Cruz, but I do remember them taking me out to dad's house, and meeting him. 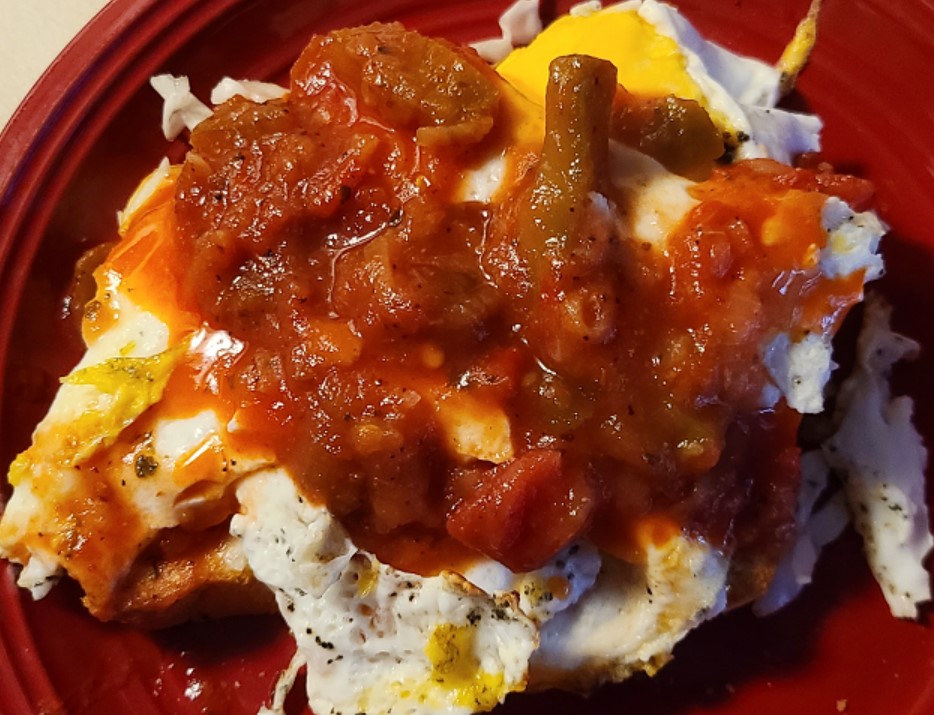 The cooking and toasting is done on the really old stove I have in my old house. It's a pain, and cleanup is a bitch. Daniel said I should get an air fryer counter top toaster oven, so I looked it up on Amazon, loved what I saw, and pushed the buy button. Be here tomorrow.

It was a Hamilton Beach product, and is the brand I always buy when I can, which sealed the deal. You know, two words dear to my heart: Hamilton and Beach! 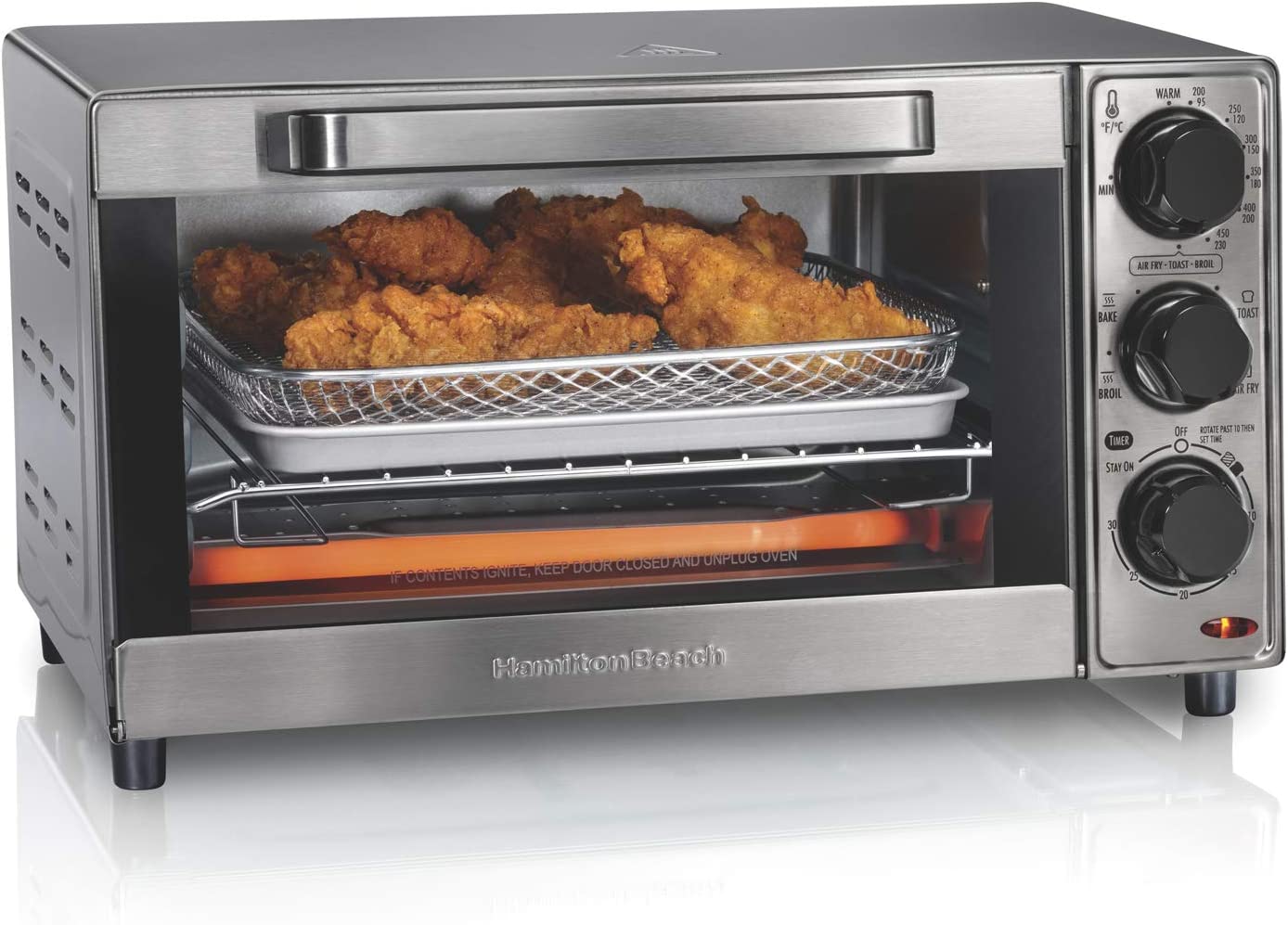 Click the image to see the product on Amazon ↑.

I've been watching Manifest on NetFlix and the Black Box for the missing flight was prominent in the story. It brought back memories of my first job in the Pacific Northwest after moving there in the early nineties.

I wrote assembly code for that unit with a team of about twenty, up in Redmond, WA for the manufacturer, Sundstrand Data Controls. This is the cockpit voice and data recorder, that exists in all major airline planes.

I remember when I first saw the box, and chuckled because it was red. That was a challenging project and I get a kick out of knowing my code may still be riding around in the planes I sometimes fly in. Yea, there's a good chance they have rewritten the code base, but not many people these days know how to write ASM, and they may have kept it.

The ducks expect breakfast at 0930. Their little internal clocks don't understand the human bullshit known as Daylight Savings Time, so I guess I have to adjust my schedule and head up to the lake at 0830 for a while.

That flock of geese was there this morning, hanging out in the ducks feeding spot, while they were out in the water a bit offshore. I know they wanted to come in, but I guess the bigger geese intimidated them. Only got three to come on shore but as soon as the geese approached, they split.

I had one of those dreams last night, you know, the super realistic dream where you think you're there and living it.

I showed up in Vegas, on the Strip, with a bunch of friends on a tour bus. I've been to Vegas several times, so my brain had a lot to feed on.

Everybody spread out around a large Casino and I was the tech guy who moved around and helped everyone with their devices that they were hooking up to the casino system to gamble.

Like most dreams of this kind, things started falling apart quickly. At one point I'm wandering around with a bag of my dirty clothes and my devices, couldn't find my friends, and eventually lost everything.

So, I thought this must be a dream and I forced myself to wake up, but when I did I was in a small room with a bed, and when I walked outside I was still on the Strip. Now I was getting concerned...

I started doing stupid things (won't go into detail), challenging my reality. Things were going downhill quickly and I really thought this was my life, but I eventually forced myself to wake up, one more time, just in case.

When I did and I was in my bed, in a little house on a dead end street, in a small town in Southern Tennessee, with laundry to do.

The poor goose at the park is a loner, an outcast from the flock, and he hangs out with the ducks because he's lonely I assume, and the ducks pick on him. The other day when they were in the middle of the lake, he was just standing on the shore by himself.

He's eaten out of my hand several times. Today a big flock of geese were there and they all came within 6 feet of me because they saw goose there eating.

I tossed them a bunch of my custom bird seed/cracked corn mix, which I have now named Quack Cocaine, and they went wacko! That corn is all it's cracked up to be. 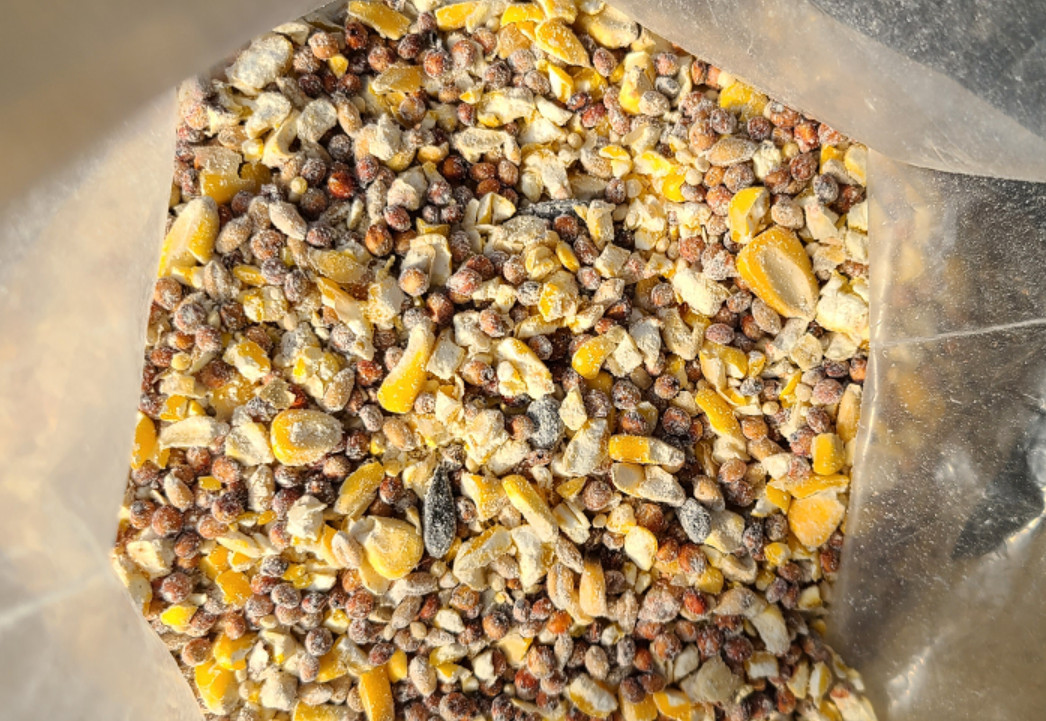 I met up with Farmer Katy at Dunkin's Market this afternoon. She was dropping off a bunch of eggs for resale, but sold me a couple dozen from her car.

It was great to see her and I helped load up the vehicle with bulk pumpkins for the farm. The passenger seat and the whole rear seat were stacked with pumpkins, quite the sight! 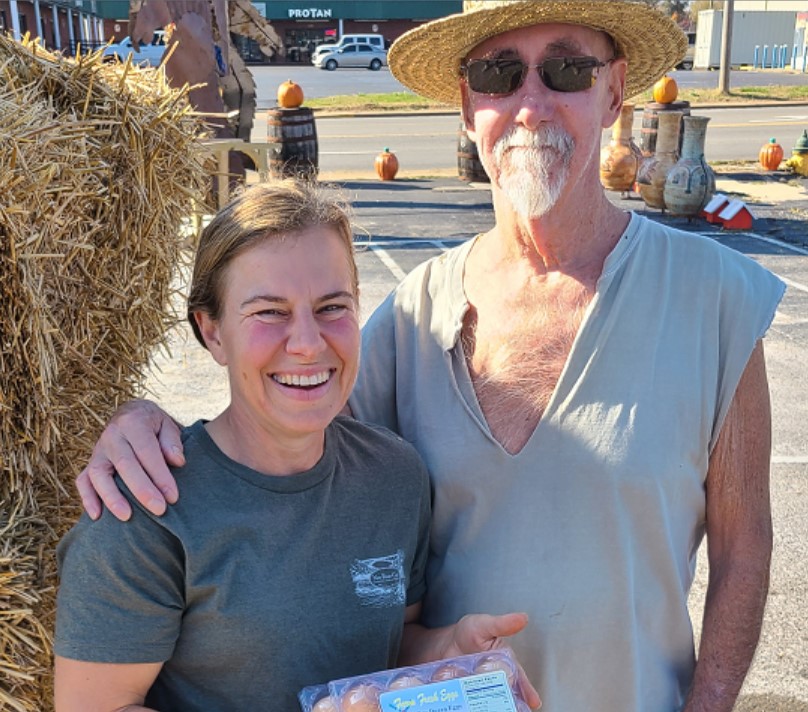 And her sheep enjoying those pumpkins: 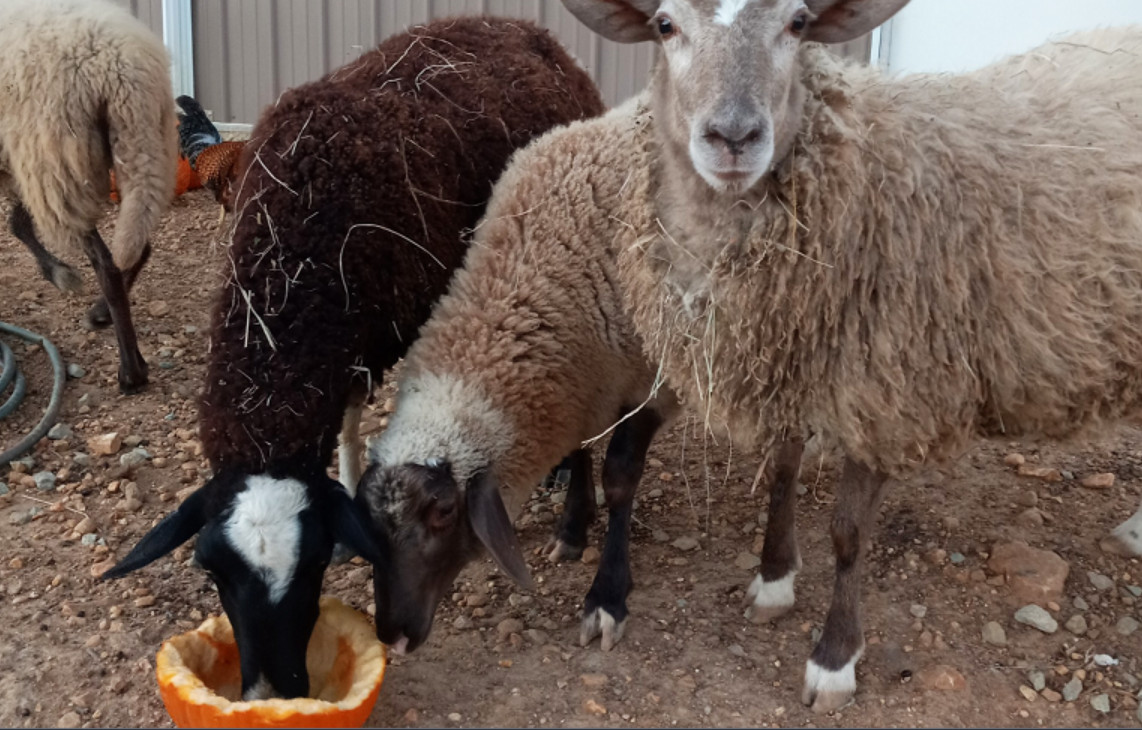 I decided to change up the ducks diet today and my farmer friend Katy suggested Performance Feed on 4th St. That's where she buys feed for her farm.

The owner John was great and he recommended cracked corn. I bought a 50lb bag of it for $10.

The ducks loved it! I'm going to mix the wild bird seed and corn together for upcoming breakfasts. 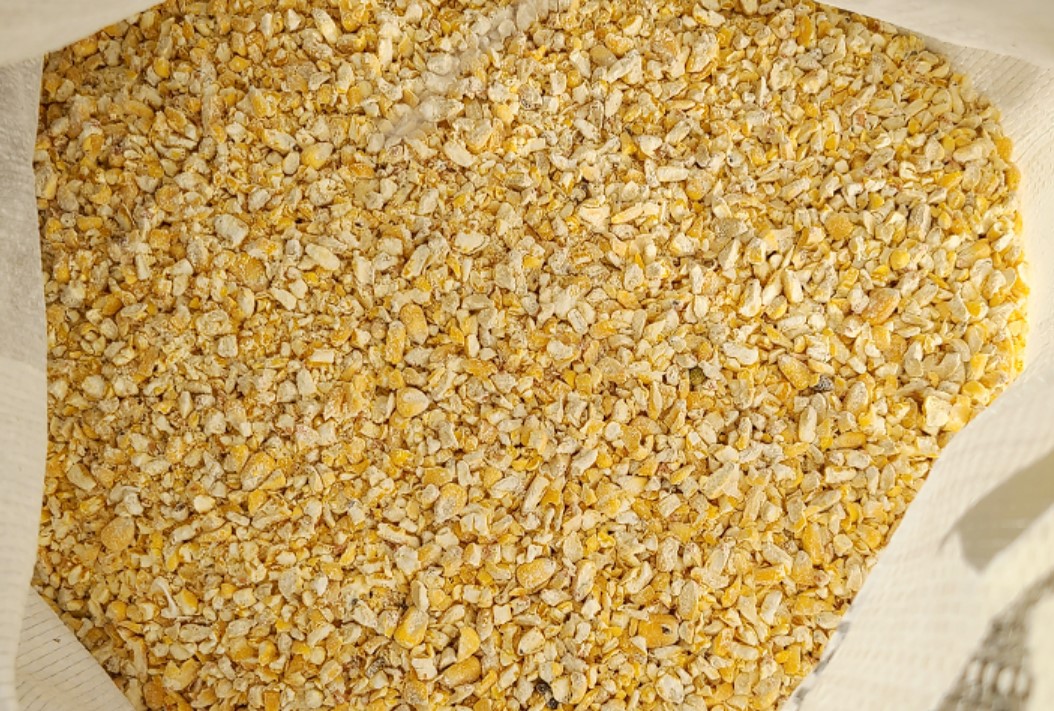 If you would have told me a year ago that Piper's feeding station would be full of bird seed, cracked corn and peanuts, I would have said you were nuts. 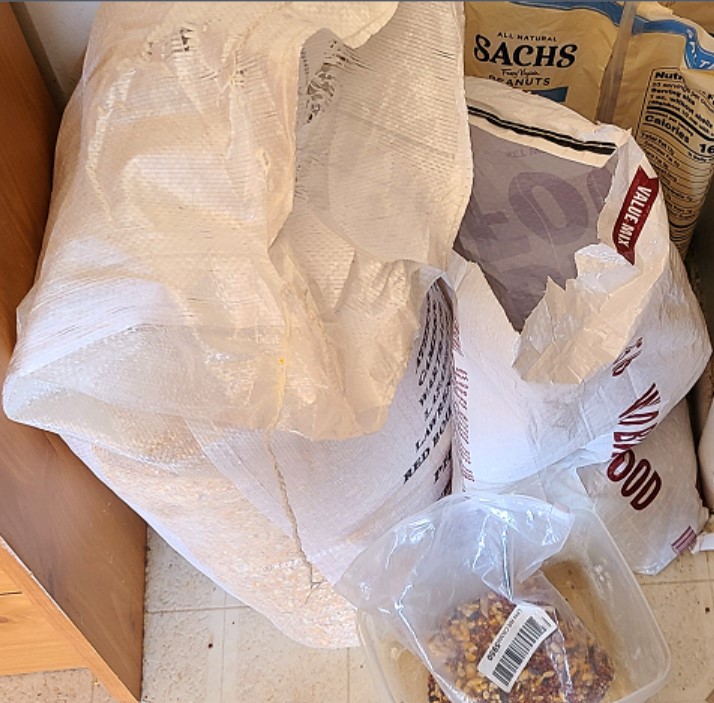